History of the Town Seal

In 1979 the Town of North Greenbush officials appointed a committee to go out to the schools in the town and solicit designs for a town seal. The competition was won by a fourth grade student at Bell Top School named Kristin Young. The motto she gave for the seal was: North Greenbush – An Ever Growing Community. The seal depicts evergreens (Groenen Bosh is Dutch for green pine wood), water (the Hudson River and our many smaller streams) grass, rocks and ferns. 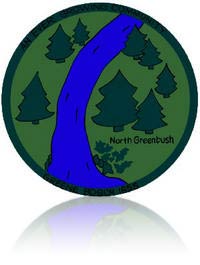 An Ever Growing Community

Get information on Summer Camp

Get a Dog License

Send a Story to the Historian

Find all department forms in one convenient location!

The Town of North Greenbush was formed from the old Town of Greenbush on February 23, 1855.